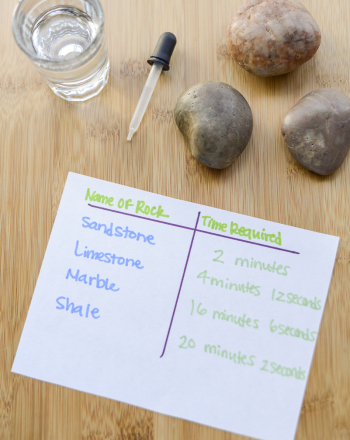 Determine which category of rock (igneous, sedimentary, metamorphic) has the ability to hold oil and by implication natural gas.

Develop a qualitative data table of the oil holding capacity of various rock samples. Learn how petroleum geologists use reservoir rock formations to figure out where to drill for oil.

Some sedimentary rocks are Porous, like a sponge. Tiny particles of sand are held together with rock "cement." Pressure, time and sediments create this natural type of "cement." Oil and natural gas form from decayed plant and animal material. Over time, the many layers of sand and sediments are compacted into Sedimentary rock. Tiny spaces, or Pores, exist between the particles that enable the rock to hold a liquid.

Petroleum oil is frequently mixed with water underground and, since oil floats on water, the oil tends to migrate upward. Sometimes, though, it comes up against Impermeable rock, through which it cannot pass. Then it becomes trapped and slowly accumulates, forming a reservoir between the particles that form rock. Sedimentary (sandstone & limestone) rocks are the most commonReservoir rocksBecause they have more porosity than most igneous and metamorphic rocks.

In summary, a rock with pores is referred to as porous. This means it has tiny holes through which oil and gas may flow. Reservoir rocks must be porous, because oil and natural gas can only become trapped inside the pores.