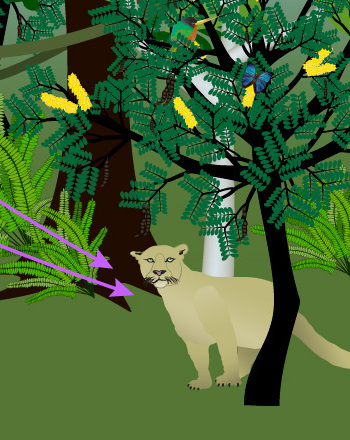 What plants and animals form a tropical rainforest food web?

One of our planet’s tropical rainforests is located in Central America, and has many gorgeous species of butterflies. The Blue Morpho ButterflyEats plant leaves of legumes when it is in its Larval State. When it becomes an adult, it drinks nectar from plants using its Proboscis, an appendage that acts like a drinking straw.

Tropical birds like to eat butterflies and other insects. JacamarsAre medium-sized birds with long beaks, and they like to eat all sorts of insects, including butterflies, moths, and wasps.

The JaguarondiIs a small wild cat that lives in Central American forests. It looks a little bit like an otter. It’s very fast and can easily catch fish and birds. It will even jump up to knock birds out of the air! 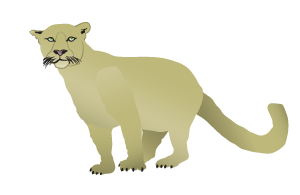 Can you think of other plants and animals that live in a tropical rainforest? Look up one of your favorite large animals and see if you can find out what it eats.

A food chain is a simple line demonstrating which organisms eat which. In a food chain, you begin with a plant. In the tropical rainforest, this might be a legume that the blue morpho caterpillar likes to munch on. Along comes a bird called a jacamar, which catches and eats the morpho. Just as the bird is flying away, the jaguarondi that was hiding in the bushes leaps out and catches the jacamar.

So do wild cats like the jaguarondi only eat birds? Of course not! Animals often eat a wide variety of other plants and animals—far more than you could fit into a food chain. This is where a food web comes in handy. 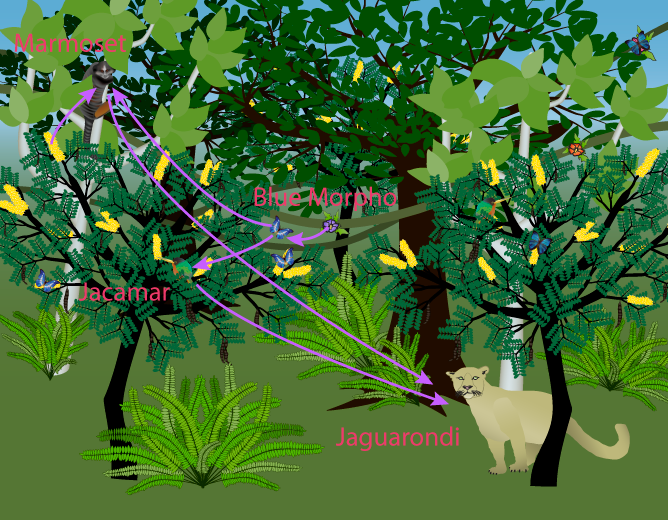 A food pyramid is different from a food chain or web. How is it different? Well, think about your blue morpho. How many legume plants does it need to eat to grow into a butterfly, and how many flowers does it visit once it’s an adult? Quite a few! On the other hand, a jacamar eats fewer butterflies than a butterfly visits flowers, and a jaguarondi eats even fewer jacamars.

Think about it this way: as you move up the food chain, each level can support fewer animals than the last. These levels are called Trophic levels, and they stand for the position an organism occupies in a food chain. A single jaguarondi (Ultimate consumer) can eat many birds or marmosets (Secondary consumers), and a single bird can eat even more butterflies (Primary consumer). Each butterfly drinks from many, many flowers, which are called ProducersBecause they produce food from the sun. Therefore, thousands of flowers indirectly fill the belly of the jaguarondi. A food pyramid can help demonstrate this by showing the different numbers of organisms that are necessary at each level of the food chain (that’s why it’s thicker at the bottom). At the bottom of your food chain, you might draw many different plants, but there will be only one jaguarondi in the small triangle at the top.