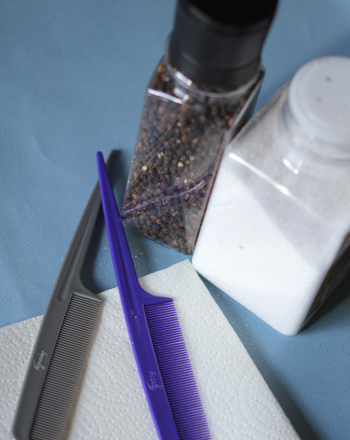 Can a comb separate salt and pepper?

The pepper particles will attach to the comb, leaving the salt in the tissue.

Salt and pepper both have neutral charges. However, the static electricity in the comb can change these charges. Because pepper is less dense than salt, it has more surface area that can be charged by the comb’s static electricity. This allows the pepper to be attracted to the comb, leaving the salt behind on the tissue. The salt may have been charged slightly, but not nearly as much as the pepper was.

What if you repeated this experiment using different substances? Keep experimenting. There’s a whole world of questions to answer!