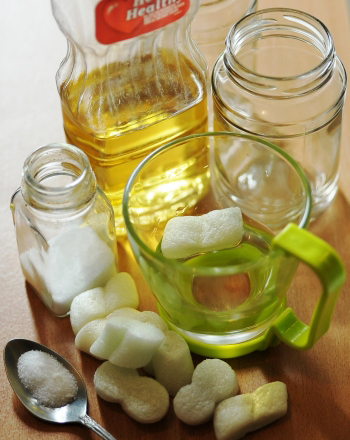 Packing peanuts do an important job, but they take up a lot of space after the box arrives. People and businesses who get a lot of things shipped to them need to a way to get rid of their packing peanuts without filling up their garbage cans. Luckily, there are many ways to break down starch packing peanuts. Your job is to find the best one.

Problem: What substances break down starch packing peanuts the fastest?

Of course, what happens in your choice cups depends on the treatments you chose.

The starch in the peanuts dissolves in water. When a substance dissolves, it breaks into very small pieces in the solvent (often a liquid) that is dissolving it. When the starch dissolves, it allows the carbon dioxide within the peanut to escape into the air, making the peanut much smaller and slimier.

Heating the water causes its molecules to move around faster, speeding up the dissolving process. Cooling the water slows down the dissolving process. Because the salt water already has so much salt dissolved in it, there’s not much room left in the solvent for starch molecules, so the peanut didn’t break down as much. The sugar solution also does not have much room for the starch, but since the sugar and starch are very similar, it is easier for the starch to dissolve in a sugar water solution. Because oil is not a good solvent for dissolving starch, the peanut does not break down much in oil at all.

If you want, you can repeat your experiment using polystyrene peanuts. You will probably be a bit frustrated with how little they change, so you may want to ask a grown-up to measure out and test ¼ cup of nail polish remover. It will break down Styrofoam peanuts, but can be dangerous if inhaled!

Make Your Own Crystal Art
Science project
Make Your Own Crystal Art
This science fair project idea teaches to understand and explore the concepts of crystal formation and dissolving substances.
Year 2
Science
Science project
Count 'Em Up: Nutty Addition
Worksheet
Count 'Em Up: Nutty Addition
Packed with peanuts and almonds to help kids count, this worksheet is sure to keep them entertained as they practise their addition facts.
Year 2
Maths
Worksheet
Cut and Paste Playsets: Safari
Worksheet
Cut and Paste Playsets: Safari
Kids can create their own playsets by coloring in, cutting out and packing up these quick cut and paste playsets.
Year 4
Arts & crafts
Worksheet
Paper Peanut Butter and Jelly Sandwich
Worksheet
Paper Peanut Butter and Jelly Sandwich
It won't be long before your little first grader will be packing his own lunch! Help introduce him to the world of quick and easy meals with this PB&J sandwich.
Year 2
Worksheet
Water Soluble Science
Lesson plan
Water Soluble Science
Your students will enjoy this hands on lesson where they make simple solutions and mixtures. They will have an opportunity to predict and observe solids that dissolve in water.
Year 2
Science
Lesson plan
How to Make Peanut Butter
Activity
How to Make Peanut Butter
...George Washington Carver invented hundreds of uses for peanuts, including peanut butter....
Year 2
Social studies
Activity
Paper Dolls Around the World: Malaysia
Worksheet
Paper Dolls Around the World: Malaysia
...In his country, people enjoy eating a dish called nasi lemak, which is rice wrapped in a banana leaf with cucumber slices, dried anchovies, roasted peanuts, hard boiled...
Year 2
Social studies
Worksheet
Simple Drums
Activity
Simple Drums
... Paper or fabric can cover the canister, with some yarn around any areas where packing tape shows through....
Year 2
Arts & crafts
Activity
See-Through Egg Science
Activity
See-Through Egg Science
...Explain to your child that the bubbles she sees in the jar tell you that the vinegar is dissolving the eggshell....
Year 2
Science
Activity
Litter Bug
Activity
Litter Bug
...Small caps are great for creating hats, twist ties are good for legs, and packing "popcorn" is perfect for tails or other body extensions....
Year 2
Arts & crafts
Activity
100 Days of School Project
Activity
100 Days of School Project
...What You Need: Large piece of cardboard (try reusing the side of a packing box) Clear-drying, non-toxic glue Scissors Ruler School-related paper ephemera such...
Year 2
Maths
Activity
Make Your Own Watercolor Wrapping Paper
Activity
Make Your Own Watercolor Wrapping Paper
...One good “green” option: re-use packing paper from store purchases—it’s often a perfect weight! Draw....
Year 2
Arts & crafts
Activity
We enable strictly necessary cookies to give you the best possible experience on Education.com.Cookie policy