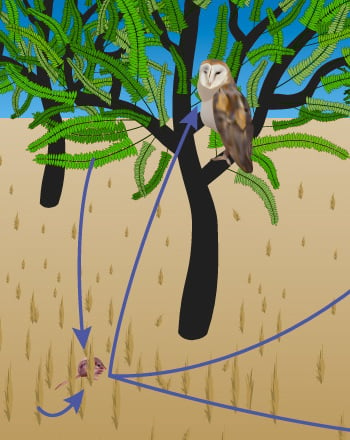 What’s hot and cold and dry all over? It’s the desert! The desert is a place of extremes. In this activity, you’ll build a desert food web and discover what plants and animals can survive in these challenging conditions.

When you think of a desert, what do you see? We often think of deserts as hot, dry places, but we often refer to them as extreme environments because while many are hot, many are cold as well. Deserts receive very little rain, and cover about a third of the earth.

Different deserts have different species of animals and plants, but these animals and plants share certain characteristics. They all need to be comfortable in Arid, Or dry, climates. Some plants have thick or waxy skin, called a Cuticle,That prevents water from moving out of its cells. The Mesquite treeIs one example of a desert plant. It lives in the southwest United States and Mexico. The tree has small, waxy leaves and a deep taproot that helps draw moisture up from the soil. 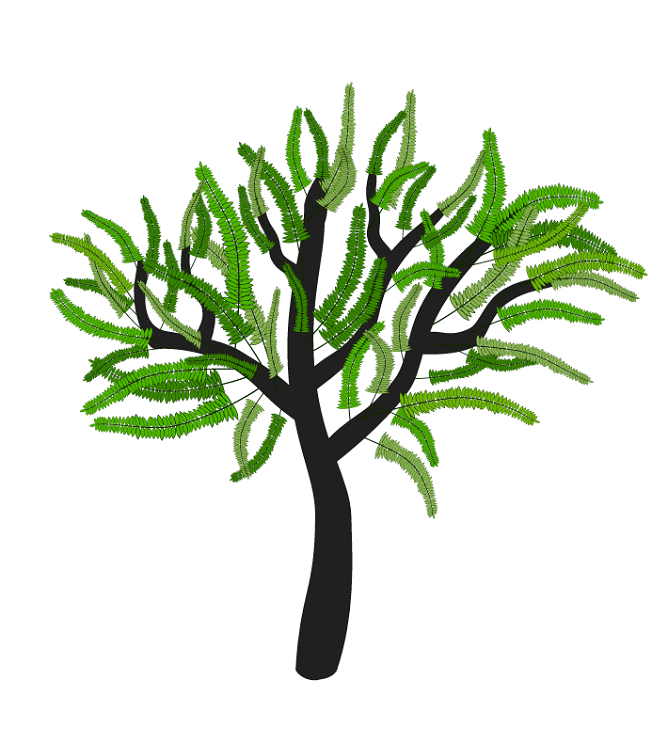 In a hot desert, animals either enjoy the heat, or they may choose to come out at night when the desert is much cooler. The Pocket mouseLives near the mesquite trees and eats the tree’s seeds. This mouse doesn’t need to drink a lot of water because it gets its water from the seeds that it eats.

The Sidewinder rattlesnakeLikes to eat the pocket mouse. This snake moves with a sideways motion and lifts much of its body off of the ground as it moves, reducing the amount of its body that has to touch the hot sand.

The Red-tailed hawkEats sidewinder rattlesnakes. This hawk is adapted to living in many different environments. It can fly far away to find food and water, and can eat many different kinds of prey animals. 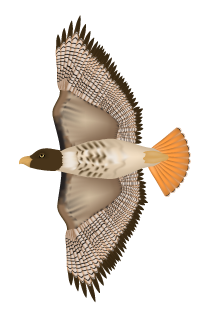 Can you think of another desert somewhere else in the world? Look up that desert and see what plants and animals live there.

In this activity, you’ll build a Food chain, a Food web, and a Food pyramid. Let’s learn about what each term means, and how each model is different.

A food chain is a simple line-up of plants and animals. In a food chain, you begin with one plant. In the desert, this might be a plant that does well in dry areas, such as mesquite. A pocket mouse could come along and eat the seeds from the plant, and a snake such as a sidewinder might eat the mouse. What eats the snake? A hawk could fly over and snatch up a tasty meal.

Life in the desert is more complicated than this, of course. You eat a lot of different foods during your day, and each of those foods comes from a different place. In other words, you have a Polyphagous Diet. The same thing is true of many organisms in the desert! Each Herbivore, or plant-eater, eats a number of different plants, and the Carnivores, or meat-eaters, eat a number of different kinds of animals. A pocket mouse sometimes eats seeds from grasses instead of nuts from a mesquite tree. An owl, instead of a hawk, could eat the mouse. Adding more complexity to your food chain turns it into a food web.

As you move up the food chain, each level can support fewer animals. Each level of the pyramid is called a Trophic level, the position an organism occupies in a food chain. A single hawk (Ultimate consumer) can eat many snakes (Secondary consumer), and a single snake can eat many mice (Primary consumer). Each mouse eats hundreds of mesquite seeds, which we call ProducersBecause plants produce food through Photosynthesis(getting energy from the sun). This means that thousands and thousands of seeds end up indirectly feeding that hawk at the top of the food chain. A food pyramid shows the different numbers of organisms that are necessary at each level of the food chain. At the bottom of your desert food chain, you might draw many different seeds, but there will be only one hawk in the small triangle at the top.

Ocean Food Web
Science project
Ocean Food Web
4th graders construct an ocean food web to learn about consumers and trophic levels, food webs, and food chains in this cool ecology science fair project.
Year 5
Science
Science project
Food Webs
Workbook
Food Webs
It's eat or be eaten when it comes to food webs! Kids read informational text as they learn about food chains and food webs in this well-illustrated workbook. Charts and writing prompts round it out.
Year 5
Workbook
Ocean Food Chain
Worksheet
Ocean Food Chain
There's a lot happening beneath the waves, including the ocean food web. Take a closer look with this colorful printable.
Year 5
Science
Worksheet
Fun with Food Webs
Worksheet
Fun with Food Webs
These worksheets help kids understand food webs, an important part of the life science curriculum in year five.
Year 5
Science
Worksheet
Introduction to Food Webs
Worksheet
Introduction to Food Webs
This packet of worksheets introduces children to food webs, an important life science concept.
Year 5
Science
Worksheet
Food Webs Reading Comprehension
Worksheet
Food Webs Reading Comprehension
This multi-page worksheet provides an opportunity for kids to practise both their understanding of food webs and their reading comprension skills.
Year 5
Science
Worksheet
I Can Make Inferences: Concept Web
Worksheet
I Can Make Inferences: Concept Web
Use this concept web to teach your students about how to make inferences.
Year 5
Reading & Writing
Worksheet
Food Conservation
Activity
Food Conservation
Children will learn about food waste and conservation, create a poster that lets others know about the importance of food conservation, and make a plan to waste less food and consume with mindfulness.
Year 5
Activity
Food Conservation Poster
Worksheet
Food Conservation Poster
Use the Food Conservation Poster worksheet to get students to create a poster including statistics about food waste and the importance of food conservation.
Year 5
Worksheet
Where in the World is the Desert Biome?
Worksheet
Where in the World is the Desert Biome?
Learn about these surprisingly diverse biomes, then test your biome and geography know-how with a desert-mapping activity.
Year 5
Reading & Writing
Worksheet
Rainforest Food Chain
Worksheet
Rainforest Food Chain
This beautiful worksheet shows the web of animals who live in the rainforest. Help complete the circle by filling in the arrows.
Year 5
Reading & Writing
Worksheet
Graphic Organizer Template: Web of Words
Worksheet
Graphic Organizer Template: Web of Words
At the end of this activity, students will have made a web of vocabulary words!
Year 2
Reading & Writing
Worksheet
We enable strictly necessary cookies to give you the best possible experience on Education.com.Cookie policy