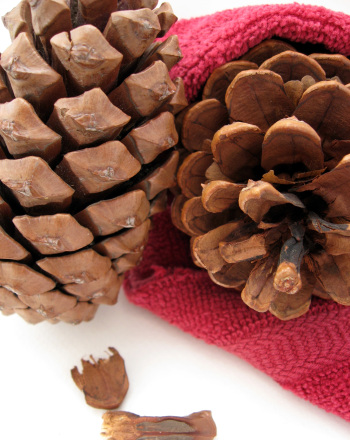 Pine cones, fir cones, spruce cones: if you live in a cool climate, you’ll see these seed-bearing structures all over the parks and the roads. Why do trees make cones? They’re the places where trees make and keep their seeds. In this investigation, you’ll explore the different properties of pinecones and discover how they can grow new trees and help you tell the weather!

When the cone gets damp, it will close up.

There are many kinds of coniferous trees in the world, and these trees cover huge areas of land, particularly in the northern parts of the world. Conifers include spruces, pines, hemlocks, cedars, and many more species of trees. They generally grow in cool climates and have thin, needle-like leaves.

Most species of conifers are evergreen. This means that they don’t lose all of their leaves in the fall like many deciduous plants do. Deciduous plants generally lose their leaves when a cold or dry season is approaching. That way, they can slow down and stop growing for a while when times are hard. Coniferous trees are different. They don’t lose their leaves at one time. Instead, they lose them gradually over time. However, there are exceptions. The larch is one conifer that loses its needles in the fall.

What makes a conifer a conifer? These trees are called conifers because they have a certain structure that holds their seeds. This structure is called a cone. Conifers are called Gymnosperms. Gymnosperms have naked seeds! Their seeds are not inside a protective house like those of an Angiosperm, or flowering plant. The seeds of a gymnosperm are more exposed.

Like many plants, coniferous trees use sexual reproduction to create seeds that will make new trees. Sexual reproduction is when plants or animals use genes from a male and a female to create seeds that have genes from both. To do this, coniferous trees have seed cones and pollen cones. The seed cones are what you might normally call a cone: they are often brown, with woody scales that have seeds inside them. The pollen cones are generally smaller and squishier. They send out the pollen that containers sperm cells. The sperm cells fertilize the seed cones and help them make new seeds.

One intriguing feature of conifers is the fact that they’re Hygroscopic. This means that they absorb or bring in moisture from the air. When it is damp in the air, a conifer’s cone gets damp. The cells on bottom of each seed-bearing scale absorb water and this pressure makes the scale fold forward, closing up the cone. When the weather is warm and dry and it’s easy for seeds to crack out of the cone and get moved around, the scale opens up. You’ll find that cones close when it’s rainy, but they also close up when it’s humid, or damp in the air.