Share this lesson plan
This lesson thoughtfully scaffolds the reading skill of predicting. Students are introduced to the concept and get to practise making predictions. They will apply what they have learned during a focused independent reading activity.
Download lesson plan
Need extra help for EL students? Try theMake a PredictionPre-lesson.
EL Adjustments
Grade
Year four
Subject
Reading & writingReadingReading Comprehension StrategiesMaking PredictionsMaking Predictions in Fiction
Thank you for your input.
View aligned standards
RF.3.4.cRL.3.1
English Language Arts and Reading2.6.C3.6.C4.6.C
EnglishR.2.7.aR.3.5.c

Which set of standards are you looking for?

Students will be able to practise making predictions and support their thinking with evidence from the text.

The adjustment to the whole group lesson is a modification to differentiate for children who are English learners.
EL adjustments 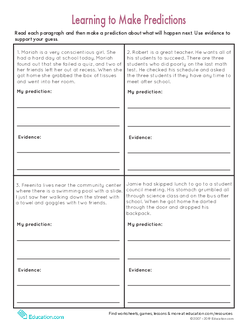 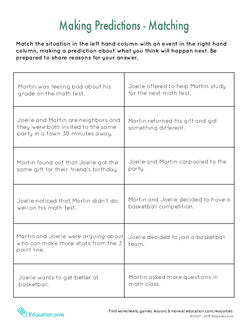 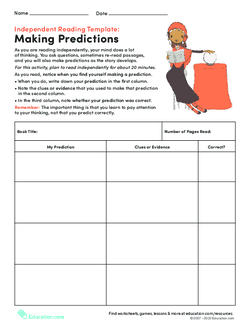 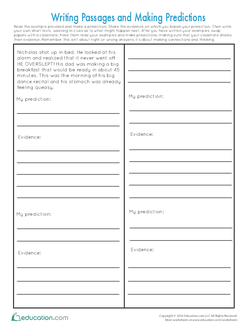 Support:During the independent reading exercise, gather struggling readers in a separate group and do the activity together with a shared text at an accessible reading level.

Intermediate:Instruct students to use the following sentence stems as they share their observations from the independent practise: My story was about ____. My prediction is ____. According to the text, ____. My prediction was/was not correct because __.