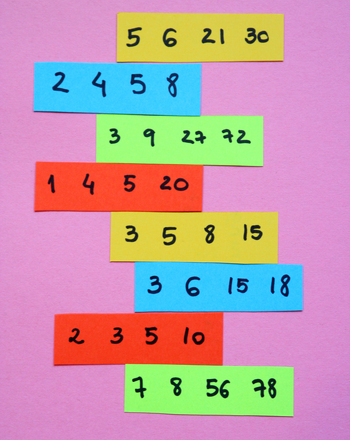 Maths fact families are useful to understand for multiplication and division mastery. You can make Maths factsPractise more fun with a game! This activity includes timed practise as well for extra motivation. Kids will enjoy trying to beat their time while identifying maths fact families.

Step 2:Explain the concept of the fact family to your child and give several examples, such as 3, 9 and 27. Ask your child to go through the multiplication and division relationships between the example you gave.

Step 3:Explain to your child that she will select a strip of paper with 4 numbers on it. 3 numbers will be part of a fact family and one will not. She will need to tell you which one does not belong and then create a multiplication or division equation using the 3 numbers that are in the fact family. She will be given a group of four numbers, three that make up a fact family and one that doesn’t belong. She must correctly identify the number that doesn’t belong and then state a division fact using the numbers in the fact family.

Step 4:  Ask your child to start by choosing a strip of paper and trying to identify the number that does not belong.

Step 5:  Once she has done one for practise, set a timer for 2 minutes and tell her to go through as many as she can in 2 minutes.

Step 6: After 2 minutes have passed, count the number of strips she completed. Now you can challenge her to try to beat her record and complete even more strips in 2 minutes this time. Challenge your child to beat her record. Play several rounds and see whether she is able to improve.

It may be beneficial to return to the game several days later to see whether your child can get an even better time. Another version of this game is to compete against someone else. Show the strip of paper to two people at the same time, and the first person to call out the number that isn’t part of the fact family wins that strip and earns one point. The person with the most points at the end of the game wins.

Related Guided Lesson
Based on your interest in Find the maths Fact Family.